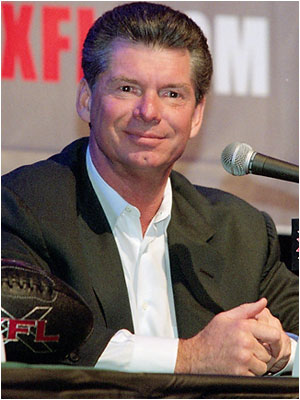 There are only a handful of men and women in the world of professional sports and television entertainment who are instantly known by name. Vince McMahon is one of those people. He joined his father in a regional wrestling operation called World-Wide Wrestling, an organization that eventually became the globally popular World Wrestling Federation.

Young Vince was a fine high school wrestler and also received a marketing degree in college. He began work as a wrestling promoter, forming his own company before hooking up with WWF. Vince provided commentary for the organization’s television program and was primarily responsible for WWF’s growing success in the 1980s.

After his father died, Vince McMahon went to work building WWF into the successful and widely recognized entertainment corporation it is today. Changing the focus to a combination of wrestling and entertainment may have been one of the wisest decisions a business executive has ever made. While the organization was still known as the World Wrestling Federation McMahon put together WrestleMania (1985).

The wrestling world hasn’t been the same since.

Vince McMahon married Linda in 1966 in their native North Carolina. They have two children, Shane and Stephanie. Both of the younger McMahons have been active in the family wrestling operations. Building the regional wrestling promotions of his father into what is now World Wrestling Entertainment has allowed Vince McMahon to acquire multi-million dollar homes in several locations. He is credited by Forbes magazine as being one of the billionaires in the United States.

Vince McMahon’s life in the wrestling spotlight hasn’t been without controversy, to put it mildly. He has been the subject of sexual harassment accusations and has been part of the movie industry as a producer of a wrestling-theme film starring Hulk Hogan. McMahon has also been at the center of a steroids investigation in which he was accused of distributing performance-enhancing drugs to wrestlers in his stable. He was acquitted. 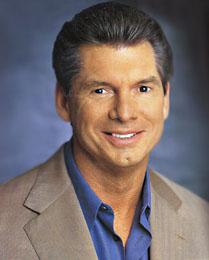 McMahon’s career at the pinnacle of professional wrestling/entertainment is complex enough and detailed enough for a book or two. Highlights/lowlights include the McMahon-Helmsley Era of 2000 and 2001; a period known as The Invasion (2001 to 2005); feuds galore, including one with Donald Trump; retirement as Mr. McMahon, which meant he would no longer appear in the ring.

While appearing as a guest referee he was attacked by a wrestler known as The Nexus. This was the start of a grand story involving McMahon in a coma because of the attack and reports that he was brain dead. Some veteran observers believe this November 2010 scene was just the start of a new era in the lives of the McMahon family. One scene even had daughter Stephanie waking up from a supposed nightmare in which her father was in a coma.

No matter which side of the McMahon fence the public is on, there is no denying the impact Vince McMahon has had on wrestling and television entertainment. He was awarded a star on the Hollywood Walk of Fame and a Public Service Award for his efforts in bringing WWE celebrities to shows for overseas troops.

9 years ago admin1
No Thoughts on Vince McMahon Biography