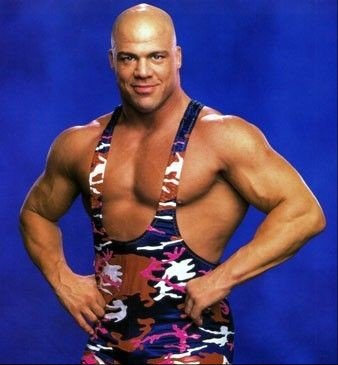 As is the case with a few professional wrestlers, this performer goes by his real name. He was born in 1968 as Kurt Steven Angle. Though WWE marketing bills him as 6’2″ tall, Angle packs 225 pounds on a frame that is closer to six feet in height. But physical measurements aside, Angle has put together a long career. He started as a junior champion in 1987 and finished second in World Cup competition at the age of 20. He was NCAA champion in 1990 and 1992 and won an Olympic Gold Medal in 1996.

Angle’s professional career includes a number of championships – WCW, WWF, Intercontinental, European and WWE titles. He has also been Hardcore champion and King of the Ring. Physical problems and injuries have slowed him down somewhat. He has told interviewers he is interested in continuing his professional-wrestling connections as a teacher and coach.

He has fond memories of WrestleMania and the challenge of performing at a top level. But he also remembers pain from a neck injury, pain that seemed to disappear when he heard the shouts and cheers of the crowd. Angle reached the peak of professional wrestling with his WWE Wrestlemania activity.

8 years ago admin1
No Thoughts on Kurt Angle Biography