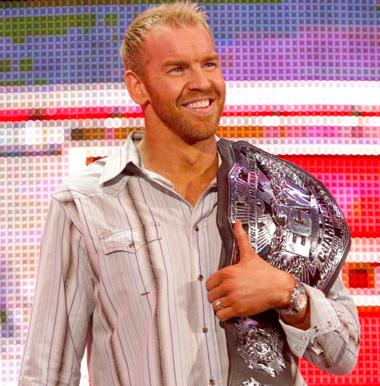 Using the ring names Christian and Christian Cage, William J. Reso wrestles with the Raw brand of the World Wrestling Federation. Now 36, Reso is a native of Canada who has pursued both professional wrestling and screen acting.

He is a student of such pro legends as Dory Funk, Jr. and Ron Hutchinson, starting his professional career in 1995 in Canada. His independent status didn’t last long however. Success in tag-team matches caught the attention of the World Wrestling Federation (now WWE). He signed on in 1998.

Christian moved to the top of the WWF ladder quickly, taking the light-heavyweight title in 1998. He originally wrestled with a “vampire” ring presence, a character that didn’t last with the Canadian performer. He went “solo” in 2001 and immediately gained respect by winning the European title and the Intercontinental title.

Reso put the WWE in the rear-view mirror when he signed with Total Nonstop Action in 2005. He began using the name Christian Cage and it wasn’t long before he won a heavyweight title (one of four he holds). He returned to the WWE fold in 2009 and quickly took another title, the ECW Championship. Records indicate that he has held that title longer than anyone else since WWE was formed. He has also won nine tag-team titles.

Even some veteran WWE fans wonder how this wrestler came to be known as “Christian” and “Christian Cage.” According to most accounts, Reso first used Christian Cage as a combination of actors’ names (Christian Slater, Nicolas Cage). Early in his career he learned wrestling skills at Hutchinson’s gym. He also fought against and with Zakk Wyld, Rhino Richards and others as part of the THUG stable. He is also associated with the tag-team name “The Suicide Blondes.”

Reso dropped the “Cage” part of his name early in his career (1998) when he first worked with WWE. He was also associated with The Brood during those early years, winning the WWF light-heavyweight title and appearing on pay-per-view television in September 1998. As mentioned earlier, he abandoned the “vampire” associations, though he was associated with the Ministry of Darkness formed by The Undertaker. Fan stories and semi-official information about those years show that there was some dissension in the ranks that led to other wrestlers “rescuing” Christian from the grips of The Undertaker.

Christian had success with TNA, winning the heavyweight title after moving to that organization in 2005. He came back in 2009 and won the ECW title at Backlash. This was also the night that Edge and Christian came face to face again. Edge would win another world title that night.

Reso, a native of Ontario, like wrestling as a youth, but like many Canadian kids he was also very interested in hockey. This changed while he was still in high school, thanks to friendships with several other wrestlers. He now lives in Florida.

8 years ago admin1
No Thoughts on Christian Biography