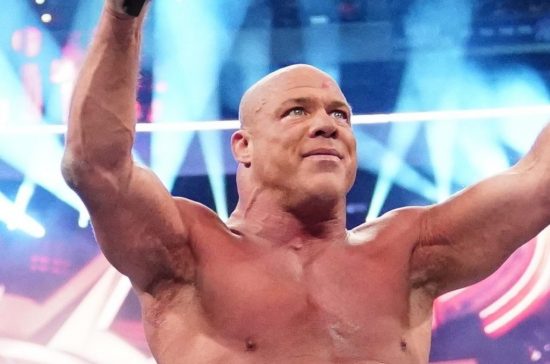 Kurt Angle discussed his failed drug test and suspension from WWE in 2006, soon before he left the business, on a recent episode of The Kurt Angle Show podcast. Kurt Angle said that Dr. Black was the one who contacted me. He worked for the WWE as a doctor. ‘Listen, you failed a drug test,’ he remarked when he called. I was on painkillers at the time, but I had a prescription for them. Dr. Black informed me that I had been arrested for using this drug. I informed him I had a prescription, and he claimed it was past due and that I was suspended, so I told him to f**k himself and hung up. ‘Listen, you can’t tell Dr Black to f**k himself,’ Vince McMahon tells me. You’ll be suspended for 30 days if you don’t call him back and apologies.

I apologised to Dr. Black over the phone, and I was suspended for 30 days. It was something for which I had a prescription, but I simply let it expire. He further added that Vince (McMahon) informed me that I had been suspended. ‘Take a month off, return home, and relax.’ You’re going to need it anyway. Simply bide your time and relax at home, which is exactly what I did. When you are suspended, they make you wrestle a few of times before you are released (you get sent home). The reason for this is that they want to create people. Before I left, I wrestled Randy (Orton) at Vengeance and then Rob Van Dam at the ECW taping, as well as doing tasks for both of them. When you’re suspended, that’s one of the things you have to do. I knew I’d come back. I had a point to make. I needed to get back there because I was angry over the suspension and knew I needed to return. The issue with me was that I was never satisfied. I yearned to be on the road when I was at home resting. When I was working on the road, I yearned to be at home. As I previously stated, my behavior had become extremely irregular. It was out of character for everyone. It was the most trying period of my life. It’s difficult for me to admit this, but I was on the verge of passing away. I was completely honest with myself. I knew I was starting to fall apart, and I knew something had to happen soon.